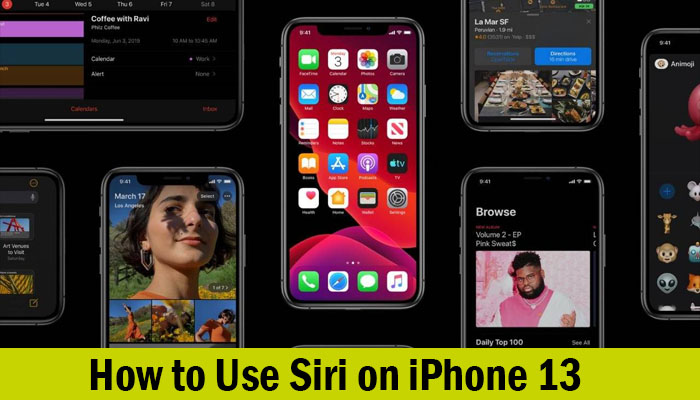 How to Use Siri on iPhone 13

The Siri feature on iPhones is an incredible feature. Not only can you make phone calls and Facetime with it, but you can also set up reminders, set a timer, set an alarm, and more. The voice-activated digital assistant is now available on all iPhone models and is compatible with a growing number of third-party applications. However, you will need to activate Type to Siri first before you can use Siri.

If this doesn’t work, you can try using Siri with other applications. For instance, you can use your iPhone’s side button to launch Siri. For older iPhones, you can still access Siri by pressing the home button. If Siri doesn’t work, restart the phone again and try using the Siri function. You can also try opening your settings and clicking the “Siri” icon again.

You can also disable Siri by closing the Settings app. This will prevent the feature from interacting with other applications. Then, open Siri and select the Settings group. To do this, you must check the option to Enable Siri When Locked. When the screen is locked, you’ll be prompted to confirm the action you’ve chosen. This will ensure that Siri is always on. If you’re having trouble with Siri, try to turn off cellular data and wait about 30 seconds before enabling it again.

If you’ve tried these steps and they didn’t work, reboot the iPhone. You’ll have to hold the Power/Top button for a few seconds until you see the Power off slider. Then, drag the slider to power off the device completely. Then, you’ll be prompted to enter your password. During this step, you’ll need to press Siri again. If you’re using iOS 13, you’ll need to enable it after the reboot.

After enabling Siri, you’ll have to enable the microphone. To do this, press and hold the side and volume up buttons simultaneously. After that, you’ll need to press the Side button and drag the Slide to Power Off slider to activate Siri. To make sure your command is understood, enable the Listen feature. When you do so, you’ll be guided through the setup process and learn how to speak phrases to Siri.

To use Siri on iPhone 13, you’ll need to open the Settings app. In iOS, you’ll need to flip the switch to enable it. To use this feature, hold the ‘Side’ button for a few seconds. Once you’ve done this, Siri will pop up the virtual keyboard. Once you’ve finished typing, Siri will respond. You can now start using Siri. It’s so easy to set up that it’s practically a must-have feature on your iPhone.

If you’re experiencing difficulties using Siri on your iPhone 13, you may have the microphone set up wrong. To check, simply try to talk to Siri through web browsing or by pressing the Side button. After setting up the microphone, you’ll have to enable the feature. Afterward, you’ll need to use the Siri Dictation feature to test the microphone. By doing so, you’ll be able to see whether or not it works.